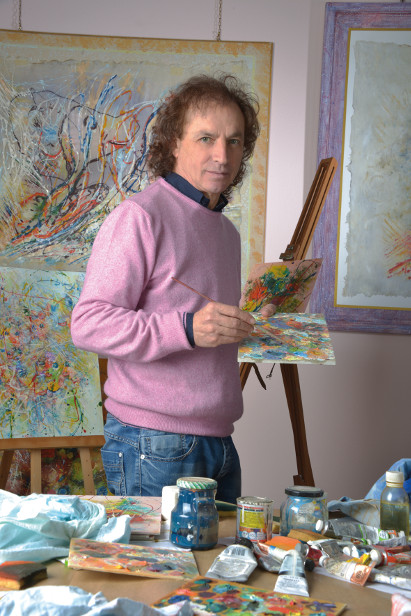 Charlie was born in the Bassa Veronese, and starts to train artistically very young. Even if he considered fundamental the academic training, he chooses not to follow a Master in an elective way, in order to look for a personal style freely and without the mimetic conditioning of the school painting.
In the 70s, during a prolonged staying in Rome, he has the chance to attend the atelier of Via Margutta, which at the time was the crossroads of the main international artists. Besides confronting with the artistic research of the time, he recovers the relationship with the pictorial tradition of the Renaissance, the drawing, the anatomical return and the light. In the same period he stays in Spain and Provence, attending important pictorial environments and in 1974, in his early twenties, he prepares his first personal exhibition in Italy.
In the following years he dedicates himself mainly to the figurative painting and to the portrait arriving , at the beginning of the 90s to the aesthetical and philosophical turning point with which he comes to the style that characterizes his artistic production in a unique way. His works are less and less figurative privileging the dynamic visible-invisible in order to hint at the transcendental aspect of the artistic image.
In 1992, with "Homage to Giuseppe Ungaretti" , with "Gnu and Giraffes" and with "At the Belvedere the closing day", he wins the first prize consecutively in three national competitions. In 1993 at the invitation by the Province of Mantua, he organizes the personal exhibition "Notes about emotions" in the house of Rigoletto. The exhibition counts over ten thousand visitors and opens him the doors to the main European capitals: his works are subsequently displayed in Paris, Edinburgh, Prague, Montecarlo and Bratislava.
In those years Charlie presides the jury of numerous artistic competitions and teaches in various schools, counting, in the same period, over two hundred and fifty pupils, whom  according to his own training experience,- he encourages to go out from the track he left, favouring the research of a style as personal as possible.
In 1996 The Slovakian Government organizes for him the personal "Gesture of the new Poetry", in Nitra, in the Topol'cianky Castle, Presidential Residence. In 1999 he obtains the First absolute Prize for painting at the "GrandTrophèe Ville de Nice" in France, at the art review "Homage to the Apuana Coast" and at the competition of the San Marino Republic. In these years make themselves known the works : "The Spanish woman", "The meeting" and "Maternity". In November of the same year he exhibits again at the Espace Miromesnille in the centre of Paris.
At the end of the 90s he interrupts painting on canvas to dedicate himself to the work "The legend of the old tower", a ceiling of 36 square metres, which allegorically represents the cyclical flow of exterior time and the fathomlessness of the interior life, characterized, in a biographical key, by the oneiric experience of the fly.
After beginning again painting on canvas, numerous public recognitions follow one another: "The Golden Lion" of Venice for the painting "On the Cliff", he wins the competition of Montecatini Terme with "The hug", and exhibits at the Palace of the Conferences in Lugano. In 2001 they mount a personal exhibition for him in Porto Rotondo, Sardinia and with the "Duck tamer" he wins for the second time the Prize of the Republic of San Marino. The following year he obtains the prize at the quadriennial of the city of Rome and he exhibits at the Palace Maffei-Marescotti in the Vatican City.
After painting, engraving, inlaying and sculpture, Charlie feels the need to experiment new artistic fields and in 2006 he plans and starts realizing , in his house in Bonavicina, a vast floor mosaic in marble with a mythological marine theme, which will take him till 2014. The work, at the centre of which is a shaped mirror, besides reflecting the above painting "The legend of the old tower", allows the spectator to be part of it becoming himself protagonist in that same moment.
Between 2009 and 2010, again in his house, he frescoes the "Room of the Arts"; on the walls he represents the allegories of music, poetry, painting and comedy, while the ceiling opens to a sky of delicate harmonies and soft transparencies. In 2012 he exhibits in EsverssurIndre in France and in February 2013, at the Art Review in Viareggio, he receives the "Burlamacco".
The year 2014 will be entirely dedicated to the edition of the volume with his works and to the organization of the anthological exhibition "Love Lines", which will be held in the prestigious Palace of the Gran Guardia in Verona immediately after the exhibitions of Monet and the impressionists and that of Paolo Veronese. Even this time the success is incredible. At the opening on the 7th February 2015, presided by the most important authorities and introduced by Philippe Daverio, over one thousand people came and the eight hundred seats of the auditorium of the Gran Guardia were not enough. The exhibition, which after 15 days closed with over 8500 visitors, has been prepared with the works displayed in chronological order underlying the artistic path of Charlie in the last twenty years, starting from the gradual flaking of the traditional image, to recompose itself, metaphorically, towards an oneiric and philosophical aspiration. In the meantime Charlie's house, with a permanent exhibition, has become a reference for Italian and foreign art lovers who immerse themselves in this joyful and deep narration about the human existence in a rejoicing of colours and explosive gestures able to catch the intimate beauty of the world and give it back as a present.